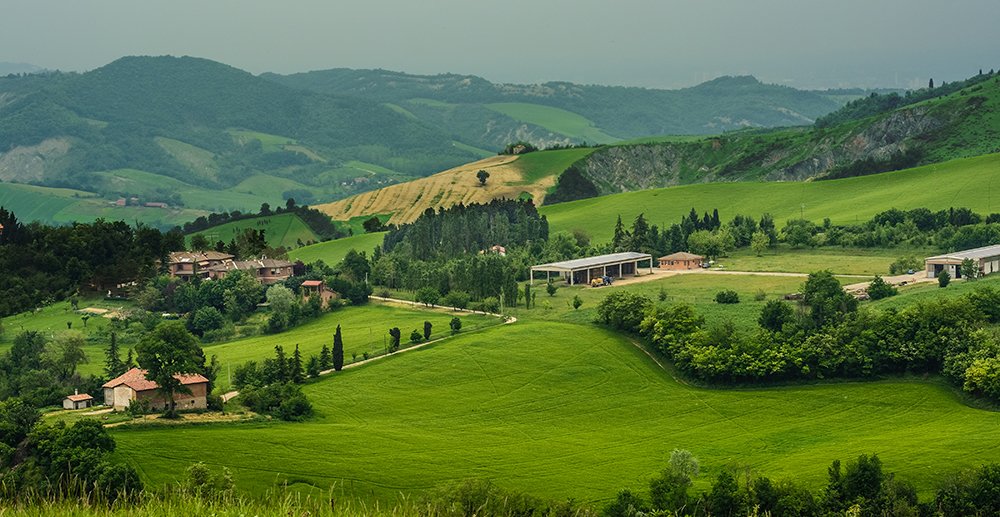 Where is Parmigiano Reggiano produced?

The history of Parmigiano Reggiano was born 9 centuries ago, and from that period of time it preserves the same recipe: same ingredients (milk, salt, rennet), same care, same area of origin. The bond between this cheese and its area of origin is essential, closely linked to the territory and to the mastery of people who carry on this tradition with passion.

The production of milk and the transformation in cheese exclusively happen in the provinces of Parma, Reggio Emilia and Modena; its production is allowed in specific areas of Bologna (to the west of Reno River) and Mantua (to the east of Po River). In our lands 4000 farms are concentrated and they produce refined milk, and more than 30 cheese factories convert it in cheese.

The feeding of animals is extremely looked after and it follows strict guidelines that block the use of ensiled fodder and fermented foods. Moreover the esteem of this product presumes also the fact that it was composed by an appropriate Museum of Parmigiano Reggiano, realised inside of an old cheese factory in the court Castellazzi of Soragna, in the province of Parma. The museum was obtained inside a nineteenth-century agricultural court of relevance of Castle Meli-Lupi of Soragna, built in 1848 by Casimiro Meli-Lupi. It is an ethnographic museum about the topic of production of this cheese. It is a cheese factory and also the building of a museum, where you can observe the places of production and tools climbed up the time frame included between the second half of the 1800s and the first half of 1900s. The museum is organised in prepared sections in three rooms obtained from three spaces that were used for the production of cheese factory, with a truck space and a shop.

The Museum of Parmigiano Reggiano is included in the museum network of Museums of food in the province of Parma, an important proof of work and activities which boast old traditions in the territory. Another excellence of the area of Parma and symbol of good food Made in Italy known all over the world is Prosciutto Crudo di Parma, a PDO salume with an high quality, achieved with a careful attention in details and in the phases of maturing. Prosciutto crudo di Parma is a good and healthy product because in its production aren’t used neither preservatives nor additives. In addition you can add the skill of "maestri salatori" and the genuineness of our lands, which with their ideal weather conditions create a sweet and at the same time rich of savour product. It is no coincidence that this wide level, cut through the waters of river Po, is called Food Valley: in fact it is an area where the fertility of the soil, the ancient traditions and the enterprise of man supported birth and development of food products of excellence. Today in the provinces of Parma, Reggio Emilia and Modena are concentrated the major productions of Parmesan, typical salumi, pasta and vegetal preserves of our country.

But Parma is the undisputed capital with the presence of culinary excellences at a global level. The esteem of wine and food tradition of Parma came into the world in high-medieval age in the monasteries of Benedictines monks who developed the procedure of production of Parmigiano Reggiano cheese. In 1800 there was a boom: in those years Parma developed the strongest food industry of tomato’s transformation and Barilla begun its own development with a simple bakery, becoming today world leader in the industrial production of pasta and European leader of products for oven. The XX century brings the birth in the county town of the Experimental Station of Food Preserves, of the Preserves’ Exhibition (precursor of current Cibus, the International Festival of Nutrition) and of Consortiums of protection of typical products (Parmesan, Prosciutto Crudo di Parma and Culatello). Marchesi. In 2003 Parma was chosen as the location of the European Authority for Food Safety. Without forgetting that in Parma there’s Alma, the international school of cooking which has Marchesi as dean.

In 2015 Parma earns the recognition of Creative city for the Unesco Gastronomy, refined international recognition.