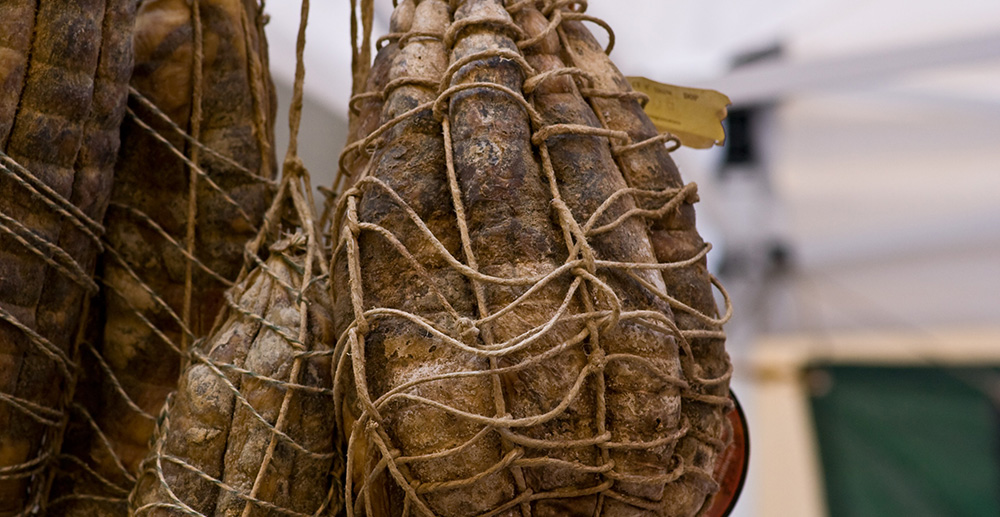 Between refined salumi, Culatello di Zibello certainly is the King. Culatello di Zibello PDO was explicitly quoted for the first time in a document of the Municipality of Parma, which date back to 1735, where prices of products, obtained by the processing of pig, were listed. Even then it was clear the esteem of this product, whose price was higher than the remainder of listed products.

Culatello will appear in other numerous documents, such as in “Calmiero della carne porcina salata” (Calmiero of salty meat of pork), where were quoted the “culatelli investiti” it means bagged culatello: the intellectuals of that period classified Culatello in the family of Salami because it doesn’t have rind, but they are bagged in bowels of animal origin. A curiosity: at the beginning this salume was called “investitura”, since the term Culatello was considered vulgar. Only in the document of 1735 the term was officially used.

Other important quotations about the esteem of this salume can be found in the literature of ‘800-‘900 and in works of Parmesan poet Giuseppe Callegari and in the correspondence born between the sculptor Renato Brozzi and the famous poet Gabriele D’Annunzio.

Gabriele D’Annunzio wrote to his friend Brozzi in a letter in 1931: “Dearest, I will make you smile. I am a greedy lover of Parmesan Culatello (with one or two t?). Exhausted due to the diligent melancholy, suddenly I felt the need to eat… While I was shouting, not without ferocity: “Immediately, immediately three slices of Culatello!”,the woman appeared with your precious packages. The biggest had the conical shape of the compact thing made up of red and salty fibre. Oh, brother, the figment of imagination of hunger forced me to produce a tribute of gratitude and happiness: Brozzi! A Culatello! And how have you thought about it?”

Culatello has its roots in the historic memory of peasant culture, which still nowadays endures in farmhouses of Parmesan valley, where tradition keeps the quality of an incomparable food alive.

Its production, highly handcrafted, was bound to the habits of peasant families that raised and butchered one or two pigs during the year for their nutrition.

Some people thought that the first realization of Culatello happened by mistake, as a result of a wrong cut of Prosciutto and as a consequent necessity to select it in different parts. Actually, humid climate was responsible to block the maturing of pork whole thigh; so it was necessary to bone fresh Prosciutto and to separately ripen the achieved parts, in other words Culatello and its littlest part, Fiocchetto.

The production of Culatello di Zibello is restrained to a well determined area: the unique and original is Culatello produced in Zibello, in the province of Parma, and in other provinces of Parmesan valley which are allowed to the processing and maturing: San Secondo, Busseto, Colorno, Polesine, Roccabianca, Sissa and Soragna. Here the tradition is so strong to create numerous celebrations and festivals dedicated to this sublime product.

Since 1996 Culatello di Zibello boasts PDO Brand (Protected Designation of Origin), guarantee and protection of meticulous procedure of production. The production, set aside to 8 municipalities previous mentioned, happens between September and February and uniquely uses meat of heavy pigs between Emilia Romagna and Lombardy.

Culatello di Zibello is part of also Presidi Slow Food of Emilia Romagna, formed only by four companies in the province of Parma. Salume of Presidio is produced from November to January and is matured for at least 18 months.